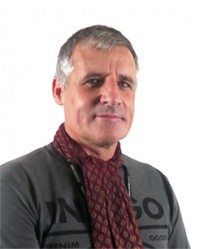 In previous work I have developed an approach of creating associations using found items to generate visual practice. The methods used as part of my MA Graphic Arts Practice consisted of de constructing found artefacts, primarily found photographs, transcribing them into a visual narrative. I developed 28silverknowes.com as an exploration of found photography. During the project I became aware and interested in the construct nature of building narrative from the photography and began to form alternative theories and stories based on the body of photography.

My current research utilises previous themes to develop both a body of work and collaborative network, exploring constructed narrative and visual language generated through found items. The collaboration with other creatives including writers and actors aids the multiple construct of narrative, occurrences and contexts. Generated content is used to create works and analysed for recurring themes and perspectives from the participants.

Currently I am working with the slide archive belonging to a former RAF pilot Edward Rigg. The slide archive is a fascinating insight into the last days of the British Empire as seen from a very personal perspective. Edward was a former test pilot and also flew the Argosy cargo planes supplying British forces in Africa in the 60’s. The design process used to generate the works can be seen at: http://issuu.com/jrkelly/docs/a3_design_doc_update_rigg and the final outcomes at lastargosy.com (under development).